Upper Beeding lies at the foot of the Downs on the east bank of the River Adur on the line of ancient trading and pilgrim routes. In Saxon times it was owned by the Kings of Wessex, but after the Norman Conquest it became part of the Rape of Bramber, held by William de Braose. 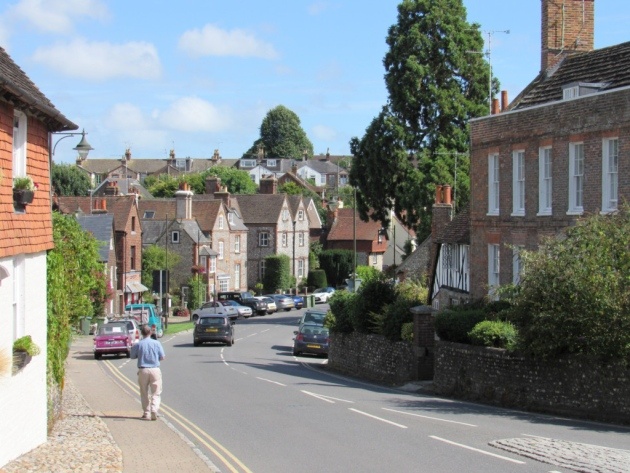 William replaced its Saxon church and built the Priory of Sele in which he installed Benedictine monks from France. In 1459 the priory and all its land and possessions in Beeding and surrounding parishes, were transferred to Magdalen College, Oxford in whose hands it remained until recent times. Despite the building of new housing estates since the 1960’s, many ancient timber-framed houses remain, particularly in the High Street and Hyde Street conservation areas and the remains of medieval salterns can been seen in Saltings Field.

Delightful walks can be taken along the river bank, across the water meadows to the north of the village, or onto the Downs where in these varied habitats a variety of wildlife can be seen.

We know that in prehistoric times people lived on the downs as they have left their mark in the form of burial mounds, hill forts, banks, ditches and field boundaries. The Romans may have passed this way too as some of their pottery has been found not far from the village and one of their ancient highways crossed the country a few miles to the north.

We really get to know the village in Saxon times, when the manor of Beeding, or Beddinges was owned by the Kings of Wessex, the last of these being Edward the Confessor. The Domesday Book tells us that at the time of the Norman conquest, the manor answered for 32 hides and did not pay tax. There were 62 villagers and 48 smallholders with 24 ploughs and a further 4 ploughs “in lordship”. There were 2 churches, 6 acres of meadow, woodland for 70 pigs and its value was put at £95 5s 6d. Another 3 virgates of land was owned by the villagers themselves. On this 15 villagers and 3 smallholders had land for 5 ploughs, 3 acres of meadow and woodland for 10 pigs. Its value was only 15s.

William the Conqueror gave this land and the whole of the Rape of Bramber to one of his barons, William de Braose, from Briouze in Normandy. This William built his castle and a church at Bramber and by 1073 had built a new church at Beeding, replacing the earlier Saxon one. He was in dispute with the monks of Fecamp who held land in Steyning, so decided to install his own lay canons in Bramber. By 1096 he had built the Priory of Sele next to the church in Beeding, installing Benedictine monks from the Abbey of St. Florent, near Saumur. He endowed his new priory with land, fisheries and salterns to support it, but it was always a poor and humble establishment. The monks were often in dispute with those of Steyning, mainly over rights to tithes and some led lives which brought the priory into disrepute. In 1396 the link with France was cut and in 1459 William of Waynfletc, Bishop of Winchester, obtained leave to transfer it and all its land to his newly founded Magdalen College, Oxford, but this could not take place until after the death of the last monk in 1480.

In 1493 Magdalen College granted the priory to the Carmelite Friars of Shoreham, whose own property was being inundated by the sea. They proceeded to rebuild it from the cellars up. Archaeological excavations in 1966 found that their cloisters, adjacent to the north wall of the church, were eight feet wide and paved with plain yellow, green and purple glazed tiles bordered with pale blue glazed bricks. The priory was finally suppressed by Henry VIII in 1538 after which it was partly demolished. Sele Priory and Church

In later years one of the windows was incorporated into Buncton Church, near Wiston and pieces of Caen stone can be seen all round the village, incorporated into walls and buildings. Pieces of carved stone can even be seen in the churchyard wall. The old vicarage was replaced in 1792 by the present building, which became a private house in 1960, still called Sele Priory, while the former farmhouse of Church Farm became the vicarage.

The oldest part of St. Peter’s Church today is the 12th century base of the tower, in which hang 8 bells, two of them dating from the 14th century when the church was rebuilt. Dr. J.R. Bloxam, who was vicar from 1862-1891, was a leading figure in the Oxford Movement and a life-long friend of John Henry Newman who became a Catholic in 1845. After being invested as Cardinal by the Pope in Rome in 1879, Newman’s first call on his return to Britain, was to his old friend Bloxam in Beeding, where he stayed at the vicarage. Bloxam kept a scrap-book and journal of letters, articles, newspaper cuttings and interesting facts about the history of the church and priory, a copy of which can be seen at West Sussex Record Office. He made his own census of the village in 1870, updating it until 1879, transcribed the parish registers going back to 1544 and obtained land from Magdalen College for the village school to be built in 1872. On either side of the Adur valley lie groups of salt mounds, the remains of a salt-making industry dating from the 11th to 15 centuries when the valley was one large estuary that flooded at each high tide. Most of the mounds have been ploughed out or otherwise levelled, but three can be seen in Saltings Field, off Saltings Way and others in fields to the north of the church. They are all listed as Ancient Monuments.

From Saxon times the manor of Beeding had land in the Weald where villagers had the right to collect wood and could drive their pigs for pannage. In time a settlement grew up there also, a church was built and in 1838 it became the separate parish of Lower Beeding. Beeding was then given the prefix “Upper” to distinguish the two, though to the Post Office and the church it is still just “Beeding”.

The Towers was built in 1883 by the architect George Smith. It had a succession of owners before becoming a hunting lodge in 1897. About this time religious orders in France were being affected by new anti-clerical laws and the Congregation of the Blessed Sacrament was offered refuge at The Towers. The sisters and their first five pupils arrived in 1903 and The Towers has been a Convent and girls’ boarding school ever since.

Around the village, especial in Hyde Street and High Street conservation areas are numerous grade 2 listed houses, many of them timber-framed and some of them thatched. The oldest building in the village is The Kings Head Public House. Its 19th century frontage hides ancient timber framing, the main part dating from the 15th century, about the same time as St. Mary’s House, Bramber on the other side of the river. Coaching Wall

On the south side of the High Street stands a high flint wall around 90 feet long. This is a 250 year old, grade 2 listed coaching wall, one of only two in West Sussex. The wall was originally 8 feet high but a further 3 feet was added in 1850 to prevent the people sitting on stage-coaches from being able to see into the garden behind! At the time the road through Beeding was part of the coaching route from London to Brighton or Shoreham via Steyning and Bramber.

Members of Beeding and Bramber Local History Society hold monthly meetings or outings and can help others in their house or family history research. They have links with the Amis du Houlme, the local history society of Briouze in Normandy with whom they have exchanged visits and information. For details of meetings and membership contact Email: [email protected]