The route of this circular walk takes you out of Steyning and then steeply up to join the South Downs Way. Following the trail, with excellent views, brings you to Chanctonbury ring, a great spot for a picnic. Chanctonbury Ring is an Iron Age hill fort, perched on the northern edge of the South Downs, 783 feet above sea level. The Ring’s current fame stems from a crown of Beech trees planted in 1760 by Charles Goring of Wiston House.

Although not well received initially, the trees later became a well known landmark. However, the trees in the centre didn’t grow too well, and it was discovered that they had been planted on an old Roman temple. Many of the trees were destroyed in the great storm in October 1987, and the Goring family, who still own Wiston House, are working to restore the ring to its former glory.

On leaving the ring the route descends towards the Village of Washington where an optional extension allows for a visit into the Village, at the time of printing the Village Pub, the Frankland Arms is closed, please check to see if it has re-opened. Then following paths along the base of the Downs you return past Wiston House to Steyning. 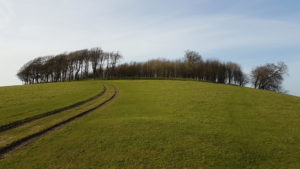 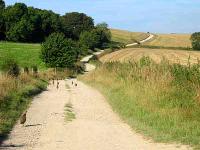 Local dog walk. Enjoy a 2 and half mile loop trail on the Southdowns, with your dog and like minded dog…

Explore the historical sites in Bramber, with your leader, Ann Blakelot

The trail will lead you through Steyning’s ancient market town utilising the highways, byways and hidden…

Steyning health walk. A walk taking in parts of Steyning and the outskirts. Includes some stiles and inclines.